I am late on the topic for my own suggestion!  It has been a little insane both in and out of game.

So I asked the question about what kind of guild are you?  What kind of place do you like to call home for both yourself and your toon….

My opinion has changed since I actually posted that as a suggestion and this makes me amazed a how much can change in a couple of weeks.

The guild I am in, was very quiet when  came back – and they still are, however aside from the lack of chatter there are further issues that have developed which I will go into later.

Firstly, chatter – I am a chatter by nature, I like the social aspects of the game and it is a large part of whether I am happy in a guild (and playing).  I like to log in and see people talking and joking in chat and basically getting to know each other. I don’t like the anonymity of the internet and I think the more people remember that there is a person behind the toon, the better people may start to behave themselves and feel accountable for their language and attittudes.

The other reason I like to see an active guild chat is because I strongly believe it improves any raiding team the guild has.  I don’t think I have ever been in a purely social/levelling guild, so I really am just talking from experience here.  If you know the people in your team as people, you can develop a more open dialogue with them when it comes to gear, stats, rotations etc; you learn each person’s preferred method of feedback.  I have seen so many people come in and just start telling (yelling) people they are idiots, or they say nothing, or they make subtle hints – these methods may work but unless you know each person individually; you can’t possibly know how to talk to them and therefore get a response to work with.

I am now back in my old guild and although I know some of the people in the guild from when I was GL; their lack of raiding etiquette has made me a little crazy.  It has been nice raiding with them in the last week (it has given me the raiding bug again) – I have determined I much prefer a raiding guild with some definite expectations and structure regarding boss fights and behaviour during raids.  The couple of raids I have been in we have spent (approx) the same amount of time discussing strats as actually attempting the fight…surely this could have been done before the raid either on the forums or in vents etc…I am a stickler for knowing the strats being attempted before we go, so I can study it, work it out in my head and understand it.  I don’t like watching 50 different videos to guess what we will attempt on the night.  The other thing that drives me to the brink – is so far every time we have done a ready check to pull the boss, someone starts up a story about previous guild/raid/friend etc….really?  You have to tell us that just as we are about to attempt a boss kill???

So to sum up, I want the perfect guild don’t i?  I want a fun, chatty guild that wants to concentrate in raids and get shit killed….

6 comments on “Shared Topic: What kind of guild are you?” 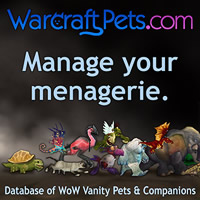