Last night I was levelling my pally, I am pretty focused on getting her to 90 as soon as I can, I would like a level 90 horde toon to do things with friends on this faction.  I was pretty amped when I logged on as I knew I only had 50% to be done to get to 87.

Ding for me! Just three more to go…88 is my worst level because it is the in between one…so I was chatting to Aza who said he would run some dungeons with me when get to the “can’t keep going” point.  I am quit excited and although I hate to impose on people I adore, I have to confess to be ever so slightly excited at the prospect of getting a couple of runs under my belt with my Frostie friends.

For lack of a better description, I am still starstruck by a lot of people in that guild because I have been reading about them for so long, I confess to being a bit of a groupy.  It is after all by reading Nav’s blog in the first place that I met them all.  I want to be 88 already so I can start running with them, so of course I must quest!

In my travels last night, I discovered this little mob sitting by a tree : 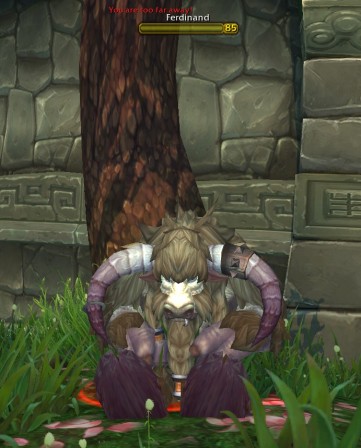 I haven’t read the book, Ferdinand the Bull, I only know of it from the movie “The Blind Side”, which is a favourite of mine.  I was so excited to see him, I couldn’t bring myself to kill him either – he is from a children’s book after all!!  ❤ Blizz right now though.

I also did one of my favourite quests – mini dragons!!!!! Yes, I will try and get a picture of this quest with all of  my toons!!

Of course last but certainly not least, towards the end of the night, someone jumped online that I had been dying to see since I got back, but had managed to miss every single time I was on – thanks to battle tags though, that will never be a problem again!!  But he remembered how much I loved one of his macros…(and I believe I have posted about it before) but I was so happy to see it!!

Honestly it just makes me giggle my arse off every time! It’s a bunny…driving a tank!!!!  A BUNNY!!!  Yeah, I never said i was going to make sense!! We had a very interesting discussion about analaog vs digital and measurements from the beginning of time – and I begged him to put the entire lesson into a blog post because it was so fascinating. I want to share it without stuffing up facts…but I was amazed last night and was having so much fun!

So first couple of days in Pandaria and I have over 40 screenies with dragons in them.  Just dragons – everywhere!!   I can’t help myself,  I would say I am spending almost as much time taking pictures of dragons as I am actually questing! (possible exaggeration)!

I am just amazed at how wonderful the artwork is!

I was tempted NOT to hand in the quest in which you have to collect the 4 little dragons, just so I could have them wth me all the time, but I figured they wouldn’t last out of the area or even if I logged out…I didn’t want to tempt fate…but  I loved having four of them trailing around!!

This is also being added to my headers because it is pure win!

Here are some more that I got to ride on or past or around! 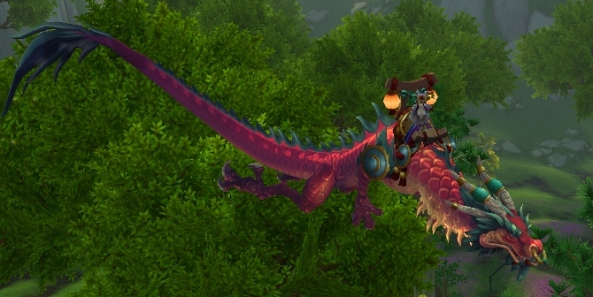 Seriously, I will stop here, I know it is only 4, but I would bore you all to death with just more dragons!  LOL