Once again I am amazed at the strength of character shown by people in this game.

I have been running dungeons, as you know, pretty solidly and this following screenshot shows that I am just incapable go playing on the same plane of existence as others.

To give background – I am finding dungeons on my boom kin actually quite hard.  I am constantly out of mana from the chain pulling that all the tanks seem to love doing, so much so that I am unable to even get out of combat to drink, so I sometimes have to resort to going kitty (with boom kin gear and spec) just to make it look like I am doing something.

I have also found that I am unable to really compete with DPS meters as my spells as as boomy tend to take some time to ramp up and by then the mob is half dead and I get one actual cast off.  I am doing better on each boss fight – when I have the mana.  So, aside from being asked  by one person why I use hurricane so much (which given everyone AEO’s mobs I am not entirely sure wtf they want me to do)  I copped this following tirade because I was not watching the tanks health…I has stupidly assumed he would have waited for the healer to be close enough…I have placed it behind a cut as it has a couple of rude words…

Of course, 10 minutes after I left I thought of so many cooler things to say that would have been insulting, and of course they were very very very rude – so I shall not type them here, suffice it to say I wish I was a faster thinker when it comes to insults, but it is so against my nature I suck at it 🙂 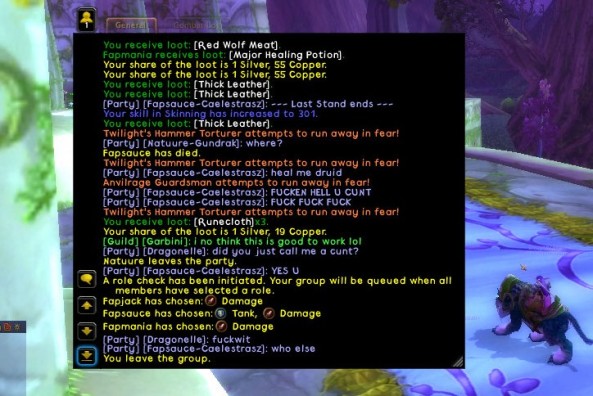 So, I felt great after that and jumped offline for a little while because I was just a little put out but it.  Note Natuure left the group as well and just before this tirade was asking where we were (I think).

Anyway, let’s just say I have been having one hell of a time with pugs – being called a scrub on my pally and now a cunt on my druid.  Yeah I love this game.  When are they bringing out a server for the non sociopathic wankers???